Jake from The Eighth Position spoke with Ben Turner about his recent experience at the Lätzsch Trombone Festival. Ben Turner is a freelance bass trombonist living in Sydney. He has performed with the Sydney Symphony and the Australian Opera and Ballet Orchestra and is preparing to move to Europe later in 2015 for further study. 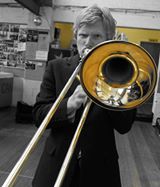 Jake: You’ve recently been to the Lätzsch Trombone Festival in the Netherlands, can you tell us where it was held and what was on the program?
Ben: The festival was held right on the border of the Netherlands and Germany and was split between two border towns, Enschede in the Netherlands and Heek in Germany. The Lätzsch festival is held every three years and is a six day seminar of warm ups, masterclasses, ensemble playing, concerts and a competition to win a custom Lätzsch trombone. Oh, and a chance to indulge in a few weißbiers with plenty of other trombonists from around the world.

Jake: What were some of your highlights?
Ben: I was very lucky to witness and participate in some fantastic concerts given by the teaching faculty and local ensembles every night at the festival. There’s nothing more valuable than being able to listen to and play next to some of the biggest names in the trombone world.

Jake: Who else attended the festival and who were some of your tutors?
Ben: The festival was attended by many students and young professional trombonists (bass, tenor and jazz) from twenty different countries. The biggest contingents were from countries such as the Netherlands and Denmark. We were very lucky to be tutored by some fantastic teachers too.

Jake: You’ve now finished your degree at the Sydney Conservatorium with Chris Harris as your primary teacher, did you notice any significant differences between the Australian teaching styles to those of the tutors at the Festival?
Ben: In my opinion, I think that teaching styles around the world are more closely linked than most people think. You don’t need to drop thousands of the dollars on flights around the world to have another teacher tell you that you’re playing out of time or out of tune.

Teachers impart their knowledge with a hope that something they say will stick in your head and then you can become your own teacher and make your own decisions. However, I would say it’s interesting to see how teachers around the world approach trombone playing and making music.

Jake: What activities did you take part in?
Ben: The activities at the festival were heavily aimed at collaborating with as many as of the other students and teachers as possible. So I found this a great way to meet all the students and teachers and get together to have a play through some quartets etc. The week was also tailored around preparation for the competition at the end of the week that was set up as a bit of a mock orchestral audition with a set piece and excerpts.

Jake: What were some of the key points you took away from your experiences?
Ben: I took away a lot of great ideas from the festival. However, some of the key points that really stuck with me were that when you pick up a trombone or any other instrument, the music should be the only important thing. Nobody cares about what mouthpiece you play on or what exercise you have been practicing. It’s always worthwhile taking a step back and looking at the big picture. The festival also offered up some pearls of wisdom from the teachers about heading down the path of being a musician.